This article isn’t about the importance of reviews on Amazon. If you have a business, you already know just how incredibly important positive feedback can be for the success and visibility of your products online. However, what you might not be considering is the quality of the reviews fuelling your products’ sales.

In today’s world of consumer distrust and manipulative marketing campaigns, people need to see reviews that are truly authentic. That’s partially why people love Amazon so much – they can find an abundance of reviews for the products they need, and many of them are highly detailed. This makes it much simpler to decide on a product you can trust.

You might have hundreds of reviews on Amazon, but if they aren’t honest and from real customers, then the quantity doesn’t matter. Let’s talk about why honest Amazon reviews are so important and how you can make sure your products get plenty of them.

People Are Getting More Skeptical

Nowadays, most internet users have learned not to take things at face value. Although you might be proud of your product’s 5-star reviews on Amazon, consumers often raise their eyebrows at products that only have positive reviews. People want to see the whole, unfiltered opinion of previous customers, and that means reading negative reviews along with praise.

This scepticism was mostly triggered by the influx of fake reviews on Amazon, as well as on other ecommerce websites. It’s now estimated by Fakespot that at least 30% of Amazon reviews are fake or unreliable. Whether brands are having their own employees write reviews or they’re paying fake reviewers to sing their praises, Amazon reviews are being infiltrated with inauthentic feedback. The product might feature a glowing five-star rating at the top of the page, but is the number justified by real consumer opinions? Maybe not.

So, how can you convince readers that your positive reviews on Amazon are trustworthy and authentic?

Surprisingly, the answer is to encourage reviews that gauge both the good and the bad aspects of your products. People want to read a full overview of your product, and even if it isn’t 100 per cent positive, they’ll feel more confident trusting your brand if the review seems honest. Amazon is the most popular online store in the U.S., and people trust many of the site’s reviews, so focus on your efforts there if you need to bump up consumer trust in your company.

For example, look at the following review someone wrote of a pair of sunglasses sold on Amazon.

Many of the other positive reviews simply said “Great!” or “Loved them!” This reviewer took it a step further and gave a detailed explanation to support his five-star rating. As a result, his review is more valuable than multiple five star-ratings with no depth.

Honest Reviews Tend to Be Longer and Keyword-Rich

Speaking of long, detailed reviews, they don’t just seem more authentic – they give you more keywords to rank for. A short, simple review might contain one valuable keyword at most, but long-form feedback will include multiple and boost your rankings for certain phrases. You can market for all the keywords you want, but Google and other search engines love reading keywords in consumer reviews.

If your Amazon review contains multiple phrases that relate to the product, you can actually improve your “Amazon SEO.” Ever wonder why some products rank higher than others, even if the lower-ranked one has more five-star reviews than the other? Well, Amazon is big on ranking by relevance. The more relevant and popular your product is, the better your ranking on the site will be.

Amazon allows people to indicate whether a review was helpful or not with the click of a button. According to a recent study, 75 per cent of reviews have been marked as “not helpful” by users. Those that were marked as “helpful” had an average length of more than 150 words. Clearly, length can often be an indicator of relevancy and detail.

To encourage longer, keyword-rich reviews, you need to ask the right questions. Consumers usually need to be prompted in order to contribute high-quality reviews. Give them plenty of things to talk about to spur their keyword potential and encourage them to write long, detailed reviews.

Fake Reviews Are Becoming a Big Problem on Amazon

As we said before, fake reviews are becoming more and more common on Amazon. According to an investigation published by Which?, thousands of fake five-star reviews have been added to the site in 2019. This can have a huge impact on sales, consumer trust, and the site’s reliability.

Check out this graph from Zachary Crockett on The Hustle, based on the data from ReviewMeta. 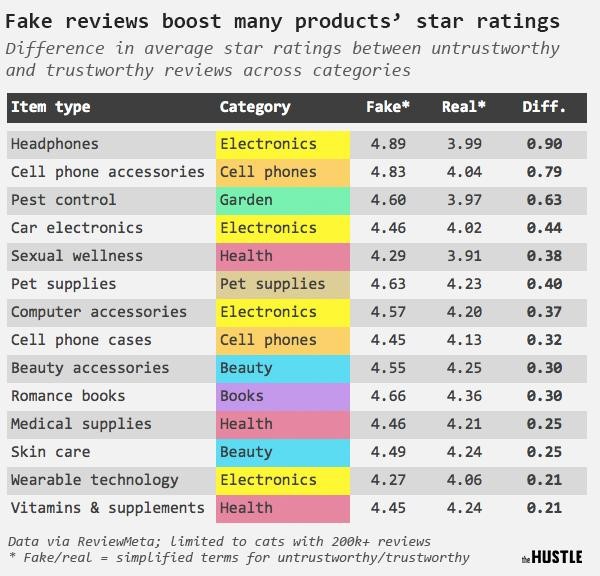 As you can see, fake reviews can dramatically impact the average rating of a product, especially in the electronics categories. The rating of the headphones that were analyzed in the data increase by almost a full star purely due to inauthentic consumer feedback. That same data also indicated that there are as many as 450,000 fake reviews of earbud headphones and even more of screen protectors and other cell phone accessories.

Recently, “incentivized reviews” were banned on Amazon in an effort to slow this increase in fake reviews. Whatever you do, don’t pay people to leave good reviews for your products. Not only is this against the rules, but it can significantly diminish trust in your brand. Report any fake reviews that are left in an effort to buff up the authenticity of your product’s Amazon page, and watch out for fake reviews from scammers and competitors. As a general rule, if you notice patterns in phrasing or verbiage throughout several reviews, this is a telltale sign they are being faked.

Although fake reviews are somewhat commonplace in today’s online markets, don’t let the trend influence how you run your Amazon profile. Strive to obtain real, valid feedback. Not only will this improve your relationship with customers, but it will also give you more authentic opinions from buyers to consider when marketing and developing new products.

The bottom line is that if you want to rank well with Amazon and score highly with shoppers, you need to prioritize honesty. Be a reliable product provider in a world of distrust and consumer scepticism. 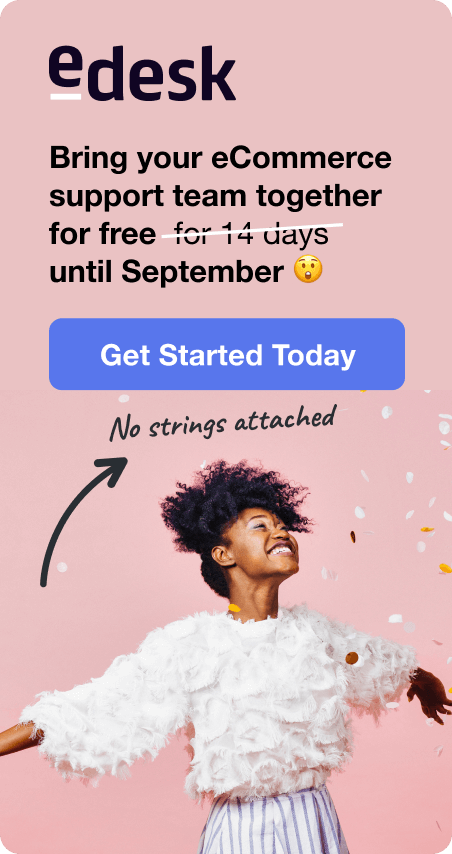